Athina Vahla is an interdisciplinary artist and teacher specialising in choreography. Originally from Greece, she arrived in the UK in 1991 having won the Greek National Choreographic Award. In London, Athina was awarded two scholarships to further her dance studies at Laban where she received the Bonnie Bird Choreography Award 1994 before undertaking an MA in interdisciplinary arts at Middlesex University. Since then, she has worked extensively as a choreographer and teacher and produced a steady stream of critically acclaimed work across Europe. Since 2001, Athina has concentrated on large scale, site-specific work that creates evocative environments for performers and audiences to inhabit and explore. She is particularly interested in the historical elements of site and how traces of the past inform the making of new work. Underpinning her process is a concern with humanism and contemporary society. Athina has been artist in residence at Greenwich Dance Agency since 2001 www.greenwichdance.org.uk and she is an Artsadmin Artist www.artsadmin.co.uk
Posted by Luke Pell at 02:37 No comments:

A body of work to be developed over the next five years focusing on the concept of the arena as a playground to investigate the idea of sport-theatre and physical and mental exertion and the threshold of pain. The first phase of research and development, Agon, took place at Greenwich Dance Agency in 2008 and the second phase, Fight Club, was a Homelands commission for Chisenhale Dance Space in November 2009. The current manifestation, In Preparation, is in process.
Posted by Luke Pell at 02:37 No comments:

The third stage of research into Arenas, In Preparation is a solo, laboratory-based work which tests the performer’s endurance to its limits. Made in collaboration with dancer/dance scientist Emma Redding, writer/dramaturg Mary Ann Hushlak, film-maker Monica Alcazar, Dr. Sarah Chin GP, and avant-garde music collective Squib-box, In Preparation was first performed as part of the IADMS conference at the Birmingham Hippodrome in October 2010 and then at the Old Deptford Police Station, London in January 2011. The next stage will be presented as a performance and discourse at the IADMS conference in Washington DC, October 2011. 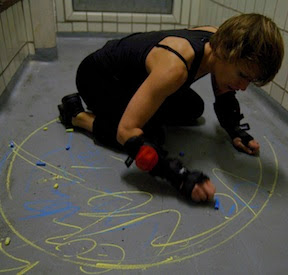